Started by jdcraft92 , 2 weeks ago


9 replies to this topic

I found an SLP dual dual exhaust and I just need to find an over axle piece. I called SLP and they said that they didn't have that piece anymore or know of anything that would work. I didn't know if that was a piece anyone recommended or if I should try to have an exhaust shop make one? I also called a salvage yard that specializes in f body parts and the guy said that he thought he could get a piece that would work, he would just need to know the dimensions of the over axle piece. Any help is appreciated.

What specific system are you asking about?  Several different 4th Gen factory systems had dual tips on each side, piped off the crossflow dual-outlet muffler.  Then there was an SLP Camaro system with 4 center-mounted outlets, but still piped from the crossflow dual-outlet muffler.  Or the SLP Loudmouth dual dual outlet system they made for both the Camaro and the Firebird?   Or is this something that SLP used on a WS6 or a Firehawk? 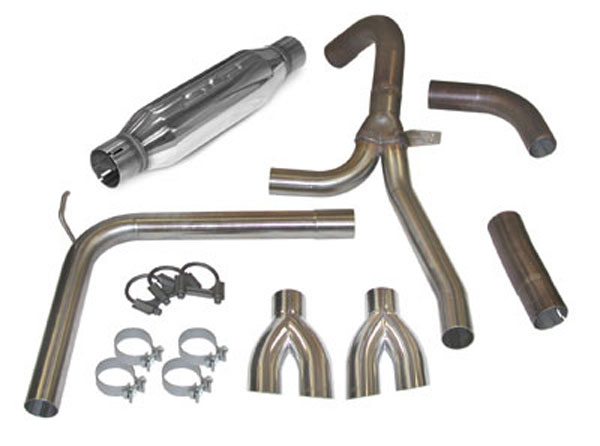 My understanding is that it is just called the slp dual dual. It came on the firehawk and was an option of some SS Camaros. Best flowing system Ive heard for an F body.

Appears to be a stock location/stock size cross-flow muffler.  If it is, any 3” mandrel bent replacement intermediate pipe for the LS1 should fit.  At worst a minor adapter if the inlet of the muffler isn’t 3”.   What are you doing for “dual” tips?

Try sending an email to Ed Hamburger at Specialty Vehicle Engineering (SVE) in Toms River, NJ.  He is the original owner of SLP (SLP name and parts division sold to Roush in 2013).  SVE is still GM's authorized aftermarket vehicle modifier.  They currently offer the 1,050 HP 2021 Yenko Camaro, sold by GM dealers with full factory warranty.  Ed is generally helpful and may be able to answer your question, or confirm or deny the accuracy of my suggestion.

Hard to believe that system with the usual cross-flow muffler will outflow the Loudmouth, but it will definitely not sound as obnoxious as the Loudmoutn.

I’m surprised you haven’t heard of the SLP Dual Dual, Fred. It has always seemed like you knew EVERYTHING about F body’s.  You wouldn’t happen to know Ed Hamburger’s email, would you? I don’t know if it is the “best” flowing system. My understanding is that any 3” catback will make similar power, correct? But this one sounds the best that I’ve heard. It is loud enough for me but many people consider it quiet. When you give it some gas though, it really wakes up. Headers make it sound perfect and I am wanting to add some, but don’t know much of anything about them. I think the Loudmouth is completely obnoxious too and without cats like most people do, sounds like a sloppy wet fart to me...

My car is basically stock except for SLP lid and I don’t plan to do a bunch of mods to it besides adding the exhaust. I was told that 1 3/4 headers would be what I would want to go with, right? The performance shop I talked to said that the 1 3/4 headers would be my best option. I also don’t really stomp on the gas much at all and I think the shop was saying that the 1 7/8 headers would work better at higher rpms. Is that true? I was wanting to get some headers that I can still pass emissions with and I want to get stainless. I’ve been trying to find options for that, but haven’t found much at all really. These Kooks headers (http://rpmspeed.com/...atn39dmii0ddho7) are for 98-99 and have EGR plus AIR. I was told my car doesn’t have EGR so I could just block that off and they’d work fine, right? The only ones similar that are made to fit my 02 from Kooks are 1 7/8.

These JBA headers are a good price, but they are 1 7/8. (https://www.amazon.c...5d-b31d6b1bfbee) Are JBA headers any good? They’re stainless plus ceramic, which I didn’t know if I needed both or if stainless steel by itself was good enough. The shop I talked to said that a lot of the price of headers has to do with how well they fit on the car. Is that true? I’ve heard that Kooks/American Racing are two of the best. I ‘d like to save money, but I want to get headers once that will basically last forever. Then the shop said that some exhausts and y pipes don’t always fit with headers. So, I didn’t know how to find out what would fit so that I get the right one. I didn’t know if I should get another Y pipe with high flow cats or not. I’ve heard that high flow cats are not worth getting on a basically stock car. I didn’t know if shops usually can make headers work with exhaust or how that all goes.

Anyway, I’ve got these tips on my exhaust now that I was planning to just have cut off and welded onto the SLP dual dual

I'm really not up on the LS1 performance parts.  Don't know the HP/RPM break on LS1 headers.  I'm pushing 800 HP/7,200 RPM redline through 1-3/4" mid-length headers.  Dyno testing has not identified any issues with the exhaust system on the car.  I did buy a set of 1-3/4" long tubes, based on dyno testing on a friends 1,000+ HP S/C LT1, but never got around to installing them.  The problem with larger primary tubes is that due to low velocity they are not as effective at scavenging at low RPM.  Scavenging helps pull more air/fuel mixture into the combustion chamber, and pull more burnt gasses out during valve overlap.  Larger diameter primaries can also create problems at low RPM due to "reversion", where exhaust gas can flow backwards and mix into the incoming air/fuel charge.  One solution is a "step" header, where the first couple inches of the primary that bolts to the head is slightly smaller than the rest of the primary.  An example would be a 1-3/4" section at the head, followed by 1-7/8" from there to the collector.

For your usage, stock engine, focusing on street driving I would guess that the 1-3/4" would be OK.  It would be good if we had some LS1 owners with more modification experience to help out here.

As to the Y-pipe issue, t don't know the details of the LS1 exhaust.  Also need to know the emissions laws enforced where you live.  If the local jurisdiction enforces Federal law, the cats cannon be relocated from the stock position.  Several states utilize the California CARB-EO certification on headers, which follow Federal regulations, and require a tag welded to the headers showing the CARB-EO approval number.  You have to determine that locally.  Typically, a CARB-EO compliant header will couple to the stock Y-pipe.  Non-compliant headers will typically offer a proprietary Y-pipe to allow the headers to connect to the stock (or aftermarket) intermediate pipe.

Awesome, thanks for the info on the headers! That is very helpful. So, if I put on a new y pipe with cats already already on it, that wouldn’t be considered relocating the cats, would it? That is what one shop had said, but I wasn’t sure if it was true or if it depends on the state. I just have visual inspections right now, but I just wanted to make sure that if I did decide to move somewhere else, I wouldn’t have to spend a bunch to get it to pass. I know that California has some special emissions rules, but I don’t think I would want to go there necessarily. I don’t know, I would just like, if possible/feasible, to have a nice sounding car with decent power that would pass emissions anywhere if need be.

To repeat, I do not have a good knowledge of the details of the LS1 exhaust.  I looked in the factory service manual, and it appears the cats of both sides bolt directly to the stock exhaust manifolds.  I don't know if anyone makes headers that can be squeezed into that configuration.  On the LT1, the drivers side cat (96/97) is bolted directly to the manifold.  In order to make CARB-EO compliant headers, the designers had to flip the primary tubes upwards, above the valve cover, and as a result, the headers didn't flow all that well, and everything in the engine compartment tended to overheat, to the extent that the plastic handles on the dipsticks for the oil and trans were melting,

In theory, long tubes enhance low RPM torque (good for a street car) but add pressure loss at high RPM.  But I have seen dyno tests where reality contradicts the theory.  The correct answer will depend on the specifics of the LS1, and I am not familiar with them.

Note that my reference to California CARB-EO standards does not apply only to California.  Some other states also use the CARB-EO data-base for emissions compliance.  And I know nothing about the standards in Missouri.

Awesome, thank you, Fred!  I really appreciate all of your help now and since I first joined Firebirdnation. You have helped me so much and have saved me quite a bit of money from your suggestions in the past! There have even been a number of times that you have been right over what my mechanic said and has saved me extra money/hassle. I take what you suggest as the top authority over my mechanic or anyone else.

Also, on a previous post of mine I made about my dash having really bad glare, you had suggested simply using matte spray paint, which seemed simple, but I hadn’t thought of it. I am oftentimes hesitant to try and do stuff on the car myself because I baby this car and don’t want to accidentally break or mess anything up. After failed attempts with covers and other more costly options, I decided to give what you said a try. The dash came off easily and looks MUCH better now and all it costed me a can of spray paint 🕺

You had mentioned that the dash can become brittle and I had read other people say they have cracked their dash when trying to replace. I read somewhere else not to push down on the dash or it will crack. I thought that pushing down on the piece in front of it when I put the dash back on would be better (which seems dumb looking back) so it cracked... I just got one of those anti slip pads though for holding your phones or whateverto cover it up. Now it looks good as new!